It is an annual crop that can be grown in dry, intermediate zones of Sri Lanka. As it is rich in unsaturated fatty acids, its nutritional value is high and there is a high export demand. 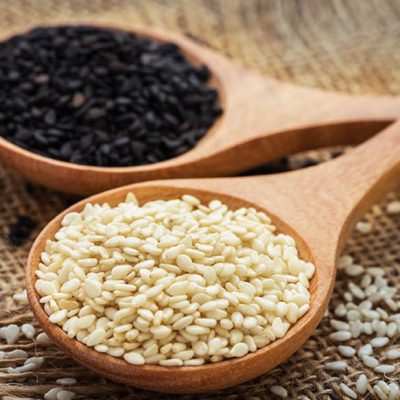 Package of Practices Without Chemical Usage for Sesame Cultivation

Sesame is mainly grown as a mono crop. However, sesame can also be grown as an intercrop with perennial crops such as coconut and mango. The most important factor here is receiving enough sunlight for the crop.

Land preparation with rains will improve water efficiency. Weeds and other uninfected crop debris should be incorporated to the soil by ploughing using a disk plough. Then fine tilth the soil using a harrower or rotovator and break large soil particles.

Properly prepare drainage lines to drain out excess water in the field and to avoid accumulation of water on the soil surface. Seed establishment in raised beds or ridges are suitable to facilitate drainage. However, if sesame cultivation in the previous season was infected, it is not advisable to grow sesame again in the same land.

Place 2-3 seeds per hill and thin-out excess plants after 2 weeks of planting and keep one plant per hill.

Seeds can be planted with the onset of rains in mid-March -early April for Yala season and in mid-September -October for Maha season.

The critical time for weed control in sesame is until about 1 month of the crop. Weeding during the thin-out stage (in 2 weeks) and about 4 weeks after sowing manually or using equipment is preferred. Weed management is easy when row seeding is practiced.

Organic fertilizers are very important to fertilize the soil. Apply well decomposed compost at the rate of 6.5 t/ha or cattle manure at the rate of 3.5 t/ha at the land preparation or two days before seed establishment and mix with the soil. Soil testing should be done every 3-4 seasons to identify soil nutrient status and other soil problems.

The disease is caused by a fungus called Macrophomina phaseolina.

The basal region of the plant becomes brownish and leaves become yellowish and dry. In severe condition whole plant gets dry and ultimately die.

At land preparation, deep plough the soil and expose to the sun for 7-10 days.

Improve drainage in the field.

Remove infected plants from the field.

If the infection is high, practice crop rotation with maize or a legume.

The disease is caused by phytoplasma and transmitted by plant hoppers.

This is the abnormal development of floral parts into leafy structures.

The petioles of the affected plant part are shorter and becomes partially or entirely sterile as it is unable to produce flowers.

Maintain a clean field without host weeds nearby.

The larvae initially feed on young leaves and shoots and during later stage, they roll the leaves and feed inside. Further the larvae feed on flowers, pods and seeds.

Plant at the correct time.

Harvesting time can be identified when the lower leaves get yellowish and lower pods become brownish and ready to split. However, the pods in the upper part of the plant may be still green at this time. When harvesting the whole plant should be cut at the base and place the bundles upright in shade for about 7 days. Leaves are drop off and pods get matured during this period.

Use tarpaulin sheets to place seeds from the plants to avoid the contaminations. The seeds can be sun dried until 8% of moisture and store the seeds in polysack bags and keep in a dry and pest proof conditions.