Internet radio (also web radio, net radio, streaming radio, e-radio, IP radio, online radio) is a digital audio service transmitted via the Internet. Broadcasting on the Internet is usually referred to as webcasting since it is not transmitted broadly through wireless means. It can either be used as a stand-alone device running through the internet, or as a software running through a single computer system.
The internet radio of Department of Agriculture is the Krushi Radio.www.krushiradio.lk is the web address for this web radio. It was started on 26th December in 2013. As a media to address the entire farming community, FBS believe that Krushi Radio can do a big task with the evolution of the present IT scenario.

Specially FBS has identified the youths who are engaging with the agriculture enterprises and practicing the modern technology for agriculture are seeking to get information from responsible agencies. Sometime these young farming
communities are not found to extension officers in their conventional and routing extension services. But this community should be considered as a special group in agriculture sector and they will be the early adopters in some agricultural innovations introduced locally.

The important thing is this generation is mostly engaged with IT based media in getting the information and they have better experience in using of the IT equipment and devices. Therefore, FBS strongly believe that Krushi Radio can take a big part of the communicate to young farming community regards to new agricultural technology.

Now Listen to your "Krushi" Radio

FBS started a Mobile application to popularize this radio among mobile phone users and to be a user friendly media.

It is simply to insert this application to mobile phone using few icons within few seconds. 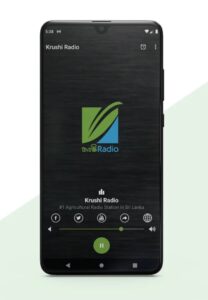 Mobile application seen in the phone